There is so much to say about Triple-Negative Breast Cancer (TNBC), especially since it seems to be a sub-type associated with African ancestry. Indeed, it is the most aggressive of all breast cancer types causing higher mortality rates where African ancestry is concerned than any other race/ethnic group.

African heritage women diagnosed with TNBC are also less likely to be treated with surgery and chemotherapy. Despite chemotherapy and surgery being the only effective chemical routes to recovery, this is true.

TNBC is also closely linked to the mutated BRCA gene – something else heavily associated with African ancestry – and further aggravated if you are a young black woman under 50 years of age.

SO WHAT IS IT?

TNBC is defined by what it is not. Medical people say it represents a range or many variations of breast cancers that have three core things in common. It lacks an expression of (1) the estrogen (ER) receptor, (2) the progesterone (PR) receptor and (3) the HER-2 receptor.

Without the receptors in TNBC, it is difficult to see where the signals are coming from to cause cancer cell growth. There’s a fire, but nobody knows how it started or how to put it out properly.

TNBC AND THE MUTATED BRCA GENE

If you have TNBC and are under 50 years of age, you have an increased risk of carrying the mutated BRCA gene. The suggestion is that the BRCA gene may drive a more progressive TNBC, particularly in a younger age group (pre-menopause) and as early as 30 for some young black women.

Most breast cancers (70%) with the mutated BRCA 1 gene are TNBC. However, a ‘chicken and egg’ or a nature v. nurture situation remains unsettled about this.

Some studies argue that the social, environmental disparities lie at the heart of TNBC and not the mutated BRCA gene in and of itself.

As African heritage people, our challenge is to understand the relationship (or intersection) between our biology (our family history) and our environmental influences.

In the meantime, while researchers, doctors, oncologists and other theorists may argue in favour of one over the other, our standpoint, in the absence of deeper significant studies, should accept that it’s a consequence of both biology and environmental disparities.

Frankly, it has always been difficult for poor people to maintain optimum health, so, by implication, breast cancer must be strongly associated with stress and trauma, to say the least.

What we don’t know is what impact that has upon our DNA. Still, it is looking more and more likely, that breast cancer is symptomatic of life struggles, life imbalances and an inability to live to the fullness of our humanity.

I know that is not going to surprise many of you, but the hopeful thing is that science is moving closer and closer to accepting that fact, evidentially. Even if it doesn’t, we must strive for the sake of future generations.

For example, some studies are clear about the association between unequal living standards and higher levels of other diseases. Disparities that aggravate disease include,

This is not conclusive, but these may play a part in defining the biology of TNBC in women of African descent and more. So don’t worry about choosing between the two of them just because TNBC comes back more frequently than other breast cancers. You don’t have time to waste, so make your diagnosis life-changing on as many HEALTHY levels as you PEACEFULLY can.

WHAT SHOULD I DO?

First, it is vital to know your receptor status because this will play a significant role in determining the treatment you might take.

Typically, you could have the following receptor variations of TNBC.

As you can see, the ‘BASAL like’ subtype of breast cancer is closely associated with the characteristics of TNBC – about 80%, but you might have one of the others, so make sure YOU KNOW AND DISCUSS YOUR OPTIONS WITH YOUR DOCTOR.

TNBC is ordinarily difficult to manage with alternative medicines once diagnosed. This is because the tumor remains relatively small when it grows, so it can go unnoticed but grow very fast.

Mammograms have a 30 per cent failure rate, particularly disadvantaging young black women with more extensive dense breast tissue. Still take a mammogram but do not let it represent the final say over your instincts. This is so important.

By the time of diagnosis, it may already be dangerously at stages 3 or 4. Choices of treatments lessen as cancer advances. Black women with TNBC have a high frequency of metastasis to the lung, liver and brain, so survival is something you have to take very seriously.

The problem is, Triple Negative Black Breast Cancer (TNBBC) lacks any targeted therapies, but chemotherapy and surgery usually are what is offered.

It just means the chemo given to you was probably designed for white European women because they were the ‘data’ from which nearly all chemo was designed.

However, if you face death, you may still argue that it is better than nothing. It still works for many black people to varying degrees, and chemo has strong side effects for almost everyone, no matter who you are.

Agreed, it has also failed to save the lives of black and other people. So some of you will consciously opt to face the time you have left without chemotherapy, and those are the decisions you must make for yourselves.

There are options within choosing to take this chemical route. For example, you might discuss with your doctor whether to have chemotherapy before you have surgery for the following reasons,

Although Black Breast Cancer seeks to unite our global breast cancer commonalities, across the globe this must be on a sliding scale for a variety of reasons.

In my own view, and broadly speaking,  African heritage women are the most under-rated and socially disadvantaged group in the western world. This is indicative of the undervalued and over-exploited African continent that leaves Africa and its people impoverished. I would say similar of the Caribbean and the indigenous populations across the world.

Where this affects black breast cancer, there are determinants such as socioeconomic, biology and obesity that seem to be key.

Notice the difference in this graph below between European Africans with a TNBC frequency of 16% and North, West and East Africans. 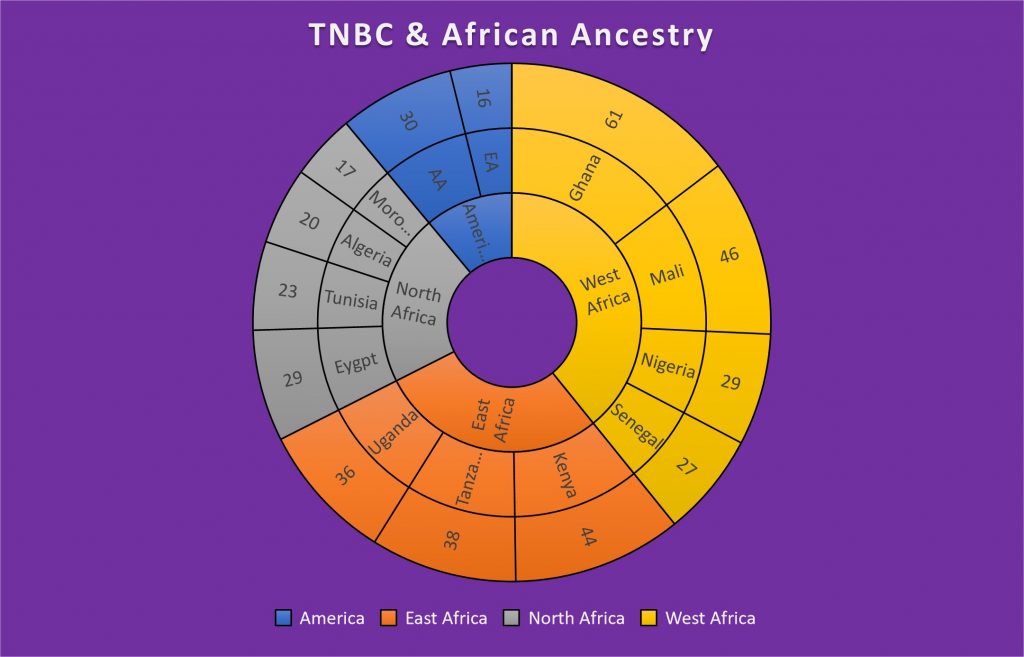 In a UK based study, 22 per cent of black women had TNBC compared to 15 per cent of white women. In North Carolina, it was found that premenopausal African American women had higher Basal-like breast cancer at 39 per cent than postmenopausal African American women at 14 per cent or white women of a similar age group at 16 per cent. From a large American study, it was found that non-Hispanic black, or black women under the age of 44 years, were more likely to have TNBC.

WHAT ABOUT THE CARIBBEAN?

Breast Cancer in the Caribbean had 15,000 new cases in 2020 with a five-year prevalence of 219 per 100,000. It has been the second leading cancer after prostate cancer for the last two decades. Following the global pattern, the Caribbean has a higher breast cancer mortality rate in contrast to America and Europe with lower incidences.

Mortality rates are comparable to Africa and given the Caribbean community is 83 per cent of African ancestry (6% Indian, 9% mixed and 2% other), this should not necessarily be surprising. On the other hand, after 500 years, we might also wonder not just about the quality of living for Africans in everyday life now, but the impact of history that seemingly has ongoing consequences.

This graph is not specific to TNBC, but it does highlight an important global context where the significance between Africa and the Caribbean breast cancer mortality rates, speak for themselves. 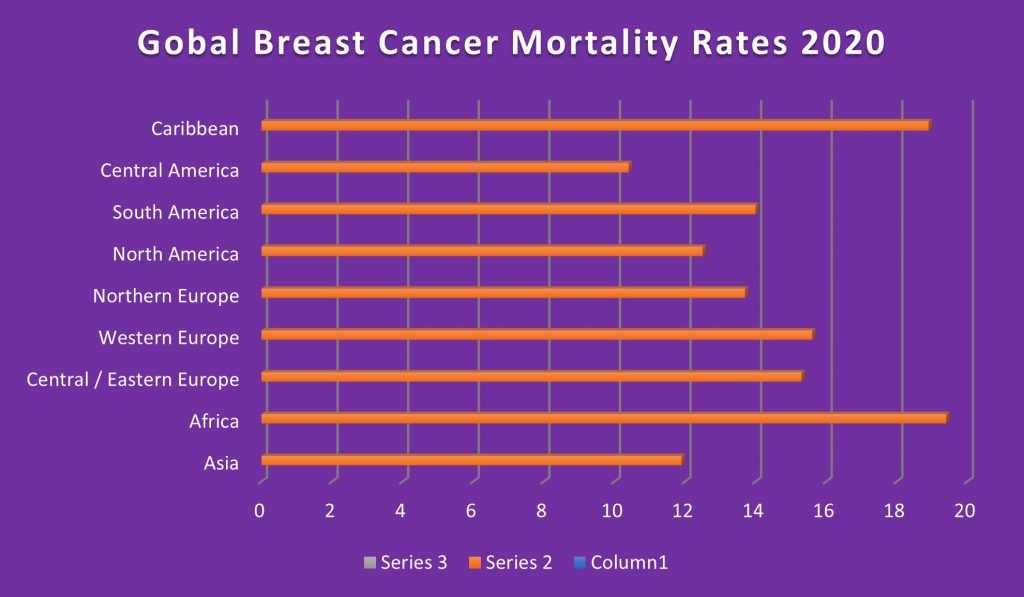 Within the Caribbean, Barbados had the highest breast cancer incidence followed by The Bahamas. Haiti had the lowest incidence.

However, based on statistics presented in GLOBOCAN 2020, estimates for the available Caribbean countries, Martinique is positioned in the lead followed by Barbados and Guadeloupe. Barbados not only had the highest mortality rate in the Caribbean but the highest in the world (Samaroo et al., 2021, page 9).

Within our countries, islands, territories and continents, there is a great deal of work to do. Let’s also find ways to come together as ordinary people, non-medical and medical people to try and save each other’s lives. Let TNBC be a rallying call to us all.