Regardless of race, breast cancer impacts women across the world more than any other form of cancer. It is the leading cause of death for women with 1 in every 8 cancers said to be due to breast cancer.

A disproportionate number of deaths occur among the poor and since the global poor are inordinately represented by black women of African heritage, breast cancer is of specific concern right across the world.

In the graph below, pink signifies the global incidence rates of breast cancer compared to cancers of the cervix, skin cancer, thyroid and liver.

Breast cancer is a disease that normally begins in the milk ducts of the breast. It is described by type (tumor identity) and stage (the growth of it). So, Triple Negative Breast Cancer is a type that can grow from stage 0 to stage 4 with 4 being the most advanced and aggressive.

Over the decades, a number of patterns have emerged across racial lines with some specific to women of African heritage. The problem is there is little research to scientifically confirm those beliefs. Studies that have been relied upon, are questioned because of the size (too small) and, or the overall reliability of the methods used to support those findings TELL ME MORE.

WHAT IS GLOBALLY SAID OR KNOWN?

Although survival rates for breast cancer are very high when it’s DETECTED EARLY enough and treatment is available, 50 to 80 per cent of breast cancer cases are diagnosed at an advanced stage in many African heritage countries, including Africa and the Caribbean.

This is evidenced in the Breast Cancer Incidence graph below, where we can see that the highest incidence of breast cancer for 2020 was significant in Western Europe (90.7) and North America (89.4). In contrast, Africa and the Caribbean had almost half the number of incidences. 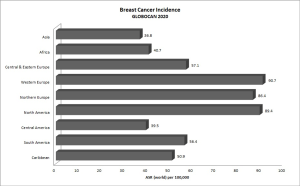 However, when we look at the graph below to contrast the mortality rates for breast cancer from those same countries in 2020, the picture looks entirely different, with the highest deaths in Africa (19.4) and the Caribbean (18.9). In contrast, North American had the second smallest (12.5) and Western Europe was also significantly less (15.6). 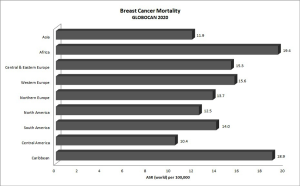 Many discussions have involved a genetic component, and some of those matters are raised HERE. The most recent research argues,

Given the history of the racialised black body frequently the focus of disease, we should caution those who heavily emphasise the genetic component. The risk is to treat breast cancer as due to imperfections of the patient independent of the living circumstances and social, family demands upon black women.

BLACK BREAST CANCER IS HERE FOR US TO HELP EACH OTHER GLOBALLY AS WOMEN OF AFRICAN HERITAGE – MAKING CONNECTIONS AND JOINING THE DOTS IN ORDER TO HEAL EACH OTHER.

TO CHANGE THE ENVIRONMENT AND CONDITIONS THAT CREATE BREAST CANCER