In Asia, we are known as Africans, Afro-Asians, African Asians, Black Asians, and Blasians. Like other parts of the world, we are marginalised and face social conflict based on race/gender discrimination. Africans from all parts of the continent are living in Asia. In China, there is a place called Guangzhou known as ‘Little Africa’. In South Asia, Africans are almost forgotten people known as ‘Siddis’ though they have lived in India and Pakistan for more than a thousand years. We’re also long settled in Sri Lanka.

Over the past few decades, Asia has seen rapid economic growth, with an increase in life expectancy, declining mortality from infectious diseases, and a move to westernised lifestyles. While these developments are said to improve standards, they come with a price.

The problem is that population-based cancer registers only cover 20 per cent of all Asian countries and only 4 (8%), i.e., Japan, Korea, Singapore, and Taiwan China, cover the entire population.

There are 48 countries in Asia – according to the UN.

I’m bound to say, if there is an absence of representative data at this level, the chances of getting an accurate assessment of the breast cancer experiences of Africans living in Asia, is difficult. That’s why we need to talk to each other. If you’re living in Asia, contact BBC and let us know what the African experience is for you if you or your family are impacted by breast cancer.

There is a little more information about indigenous Oceania populations but not much.

MICRONESIA are Philippines and Hawaii and encompasses more than 2,000 islands.

In the absence of much else, I am using the World Health Organisation Reports to give us some idea of what is going on for the people of Oceania. You will see that breast cancer is the most serious of all cancers for women with the highest incidence and mortality rates. I have no idea what forms of quality healthcare is available to you so do let me know. 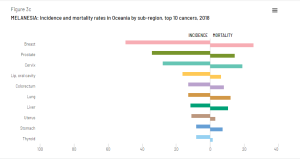